For the past two months I have been tracking journalist arrests at Occupy protests around the country. Today, Nov. 15, was the worst day yet in terms of police suppression of the press.

It all began in the middle of the night, when police moved in at 1 a.m. to forcibly evacuate Zuccotti Park, the original Occupy Wall Street encampment. Not long after the park raid began, journalists on Twitter began to report that they were being blocked from covering the police actions.

New York Mayor Michael Bloomberg said the police kept the media away “to prevent a situation from getting worse and to protect members of the press.” But according to the New York Times, one journalist told a police officer “I’m press!” and the officer just responded “Not tonight.”

If the mayor of our country’s largest city thinks protecting the press means silencing them, we’re in big trouble. 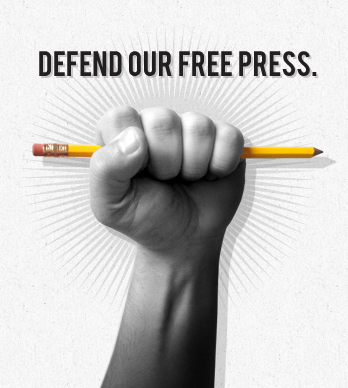 Almost exactly three years ago at the Republican National Convention in St. Paul, Minn., more than 50 journalists were arrested, including Democracy Now! host Amy Goodman and two of the show’s producers, Sharif Abdel Kouddous and Nicole Salazar. The video of Salazar’s violent arrest is a haunting reminder of why we need to defend our free press.

At the time, Free Press launched an online petition and organized residents of St. Paul to call city hall. Within days we had more than 60,000 petition signatures and held a rally on the steps of city hall calling for the release of all detained journalists and demanding all charges be dropped. Most journalists were released a few days later and just a few months ago, Amy Goodman and other journalists received a settlement from the St. Paul police.

It’s time for the public to stand up again. We are launching a new effort to demand Mayor Bloomberg and the U.S. Conference of Mayors drop all charges against journalists and publicly commit to upholding the First Amendment. Add your name now.