I was on a family vacation in Washington, DC, last week on August 14. It was a lovely summer evening and on a whim my wife and I took our two young sons down to the Lincoln Memorial at sunset. 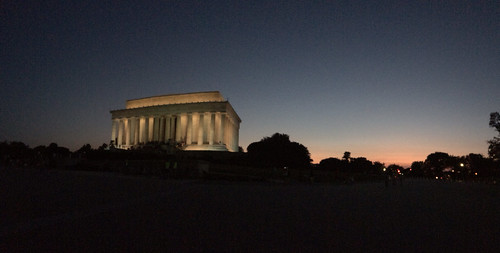 As the last light of day lit up the sky around the monument I walked up the steps and heard a chorus of people reciting Dr. Martin Luther King’s “I Have a Dream” speech. The group of high school students knelt on the spot where Dr. King stood, pointing to the inscription there, and breathing new life into his words.

High school students kneel where MLK stood on the Lincoln Memorial and recite "I have a dream" into the evening air. pic.twitter.com/602BYuuIDs

Half a nation away in Ferguson, Missouri, a different sound filled the night air. Just a few days earlier a young unarmed black teenager, not much older than those who stood before me on the steps of the Lincoln Memorial, was killed by police. And on this night, protesters calling for justice met militarized police who were prepared for a fight.

Like many, I had been watching the events unfold and escalate over social media. But as I descended the steps and stood looking out over the reflecting pool, towards the Washington monument, the White House and the Capitol, my phone began to buzz.

Reports were swirling about two reporters being arrested. It turned out Ryan Reilly of the Huffington Post and Wesley Lowery of the Washington Post had been detained, and later that evening a local Alderman and citizen journalist Antonio French was arrested.

For years I have been tracking journalist arrests at protests across the United States and many of my friends and colleagues were sending me tips and info about the arrests. I never expected – nor wanted – journalism arrests to be my beat, but I’ve tried to bear witness, document every arrest and support journalists of all kinds whenever I can.

As I chased down information that night, looking for confirmation to rumors bubbling up on Twitter, and trying to piece together the story of each arrest, I was drawn more and more into the events happening on the ground in Ferguson.

But one tweet pulled me back to Washington, DC. The Southern Poverty Law Center tweeted a picture of Howard University students standing, hands up, in solidarity with protesters in Ferguson.

When I saw the photo come across my feed I was back at a friend’s house just blocks from Howard University. From Washington to Ferguson, and back again in a night.

Staring at that photo I retraced the evening, thinking about speech and silence, about power and race. Thinking about whose voices get heard and whose get silenced. Thinking about how moments and places are connected by these new networks, how we bear witness to dreams and nightmares, how we give both a voice.

I watched their faces on Instagram, I read their words on Twitter, but all I could hear was the high school students on the steps of the Lincoln Memorial reciting “I Have a Dream” into the August night, their words like a chant, repeated over and over and over again.

That night, the space between Washington and Ferguson, between August 28, 1963, and August 14, 2014, felt both impossibly small and still utterly insurmountable.